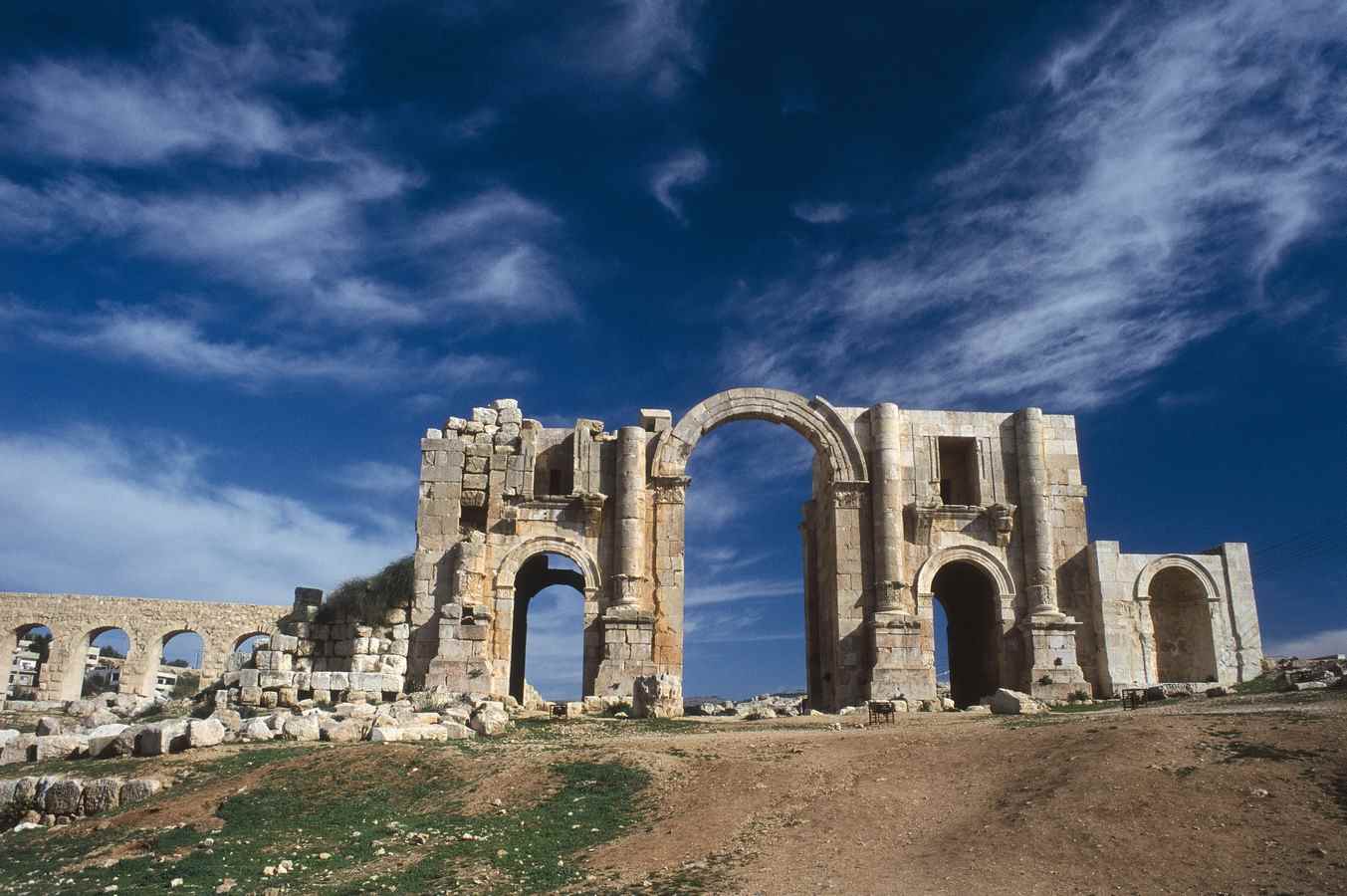 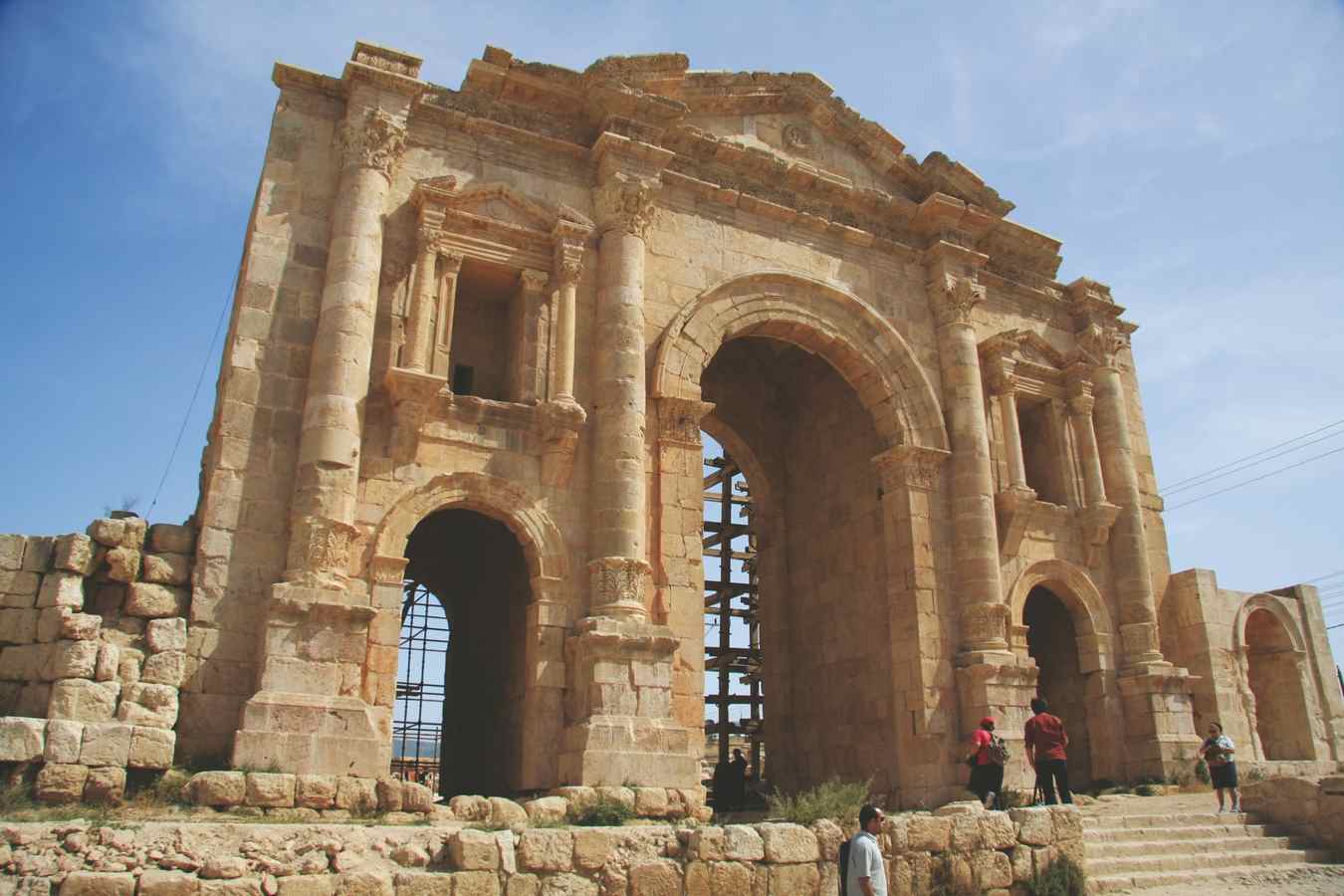 Graeco-Roman city (Called also Jerasa in ancient time), One of the Decapolis (a confederation of Ten Roman Cities dated back to the First Century B.C.) . Jerash is known as POMPEII of the East for its extraordinary state of preservation. Jerash is considered the best preserved and the most completed city of the Decapolis.
In Jerash You will see: Original Temples, Theaters, Plazas, baths and colonnaded streets. Inside the remaining walls of the city have been founded the remains of Settlement dating from the Bronze age, the Iron Age, The Hellenistic, Roman, Byzantine, Umayyad & Abbasid periods, which indicate human occupation at this location for more than 2500 Years.
JERASH HOSTS THE ANNUAL JERASH INT’L FESTIVAL OF CULTURES & ARTS IN JULY OF EACH YEAR.

Jerash, located 48 km north of Amman and nestled in a quiet valley among the mountains of Gilead, is the grandeur of Imperial Rome being one of the largest and most well preserved sites of Roman architecture in the World outside Italy. To this day, its paved and colonnaded streets, soaring hilltop temples, handsome theaters, spacious public squares and plazas, baths, fountains and city walls pierced by towers and gates remain in exceptional condition.

This fascinating city makes a great day-trip from Amman, particularly in spring, when the wildflowers are in bloom. The drive will take you less than an hour, but will transport you 2000 years back in time.
Within the remaining city walls, archeologists have found the ruins of settlements dating back to the Neolithic Age, indicating human occupation of this location for more than 6500 years. This is not surprising, as the area is ideally suited for human habitation. Jerash has a year-round supply of water, while its altitude of 500 meters gives it a temperate climate and excellent visibility over the surrounding low-lying areas.
The history of Jerash is a blend of the Greco-Roman world of the Mediterranean basin and the ancient traditions of the Arab Orient. Indeed, the name of the city itself reflects this interaction. The earliest Arabic/Semitic inhabitants named their village Garshu. The Romans later Hellenised the former Arabic name into Gerasa, and at the end of the 19th century, the Arab and Circassian inhabitants of the small rural settlement transformed the Roman Gerasa into the Arabic Jerash.
It was not until the days of Alexander the Great in the 4th century BC that Jerash truly began to develop into a sizeable town. But it was during the period of Roman rule that Jerash, then known as Gerasa, enjoyed its golden age.
The first known historical reference to Jerash dates back to the 2nd or early 1st century BC. This reference is attributed to Josephus, a historian from the Holy Land, who referred to it as the the place to which Theodorus, the tyrant of Philadelphia, removed his treasure for safe keeping in the Temple of Zeus. Shortly afterward, Theodorus lost Jerash to Alexander Jannceus, a religious priest.
Soon after Rome took control of Syria, Emperor Pompey, in 63 BC, named conquered Jerash as one of the great cities of the Decapolis League. This brought great economic benefits to Jerash and trade flourished with the Nabataean Empire based in Petra.
In 106 AD, Emperor Trajan annexed the wealthy Nabataean Kingdom and formed the province of Arabia. This brought even greater trading riches pouring into Jerash, which enjoyed a burst of construction activity. Granite was brought from as far away as Egypt, and old temples were rebuilt according to the latest architectural fashion.
The city received yet another boost in stature with the visit of Emperor Hadrian in 129 AD. To honor its guest, the citizens raised a monumental Triumphal Arch at the southern end of the city. Jerash's prosperity reached a peak in the beginning of the 3rd century, when it was bestowed with the rank of Roman Colony. During this "golden age", Jerash may have had a population of 20,000 people.
The ancient city preserved today was the administrative, civic, commercial and cultural center of this community, while the majority of the city's citizens lived on the east side of Jerash Valley.
As the 3rd century progressed, shipping began to take over as the main route for commerce. Jerash fell into decline as its previously lucrative trade routes became less traveled and therefore less valuable. By the middle of the 5th century, Christianity had become the major religion of the region and numerous churches were constructed in Jerash. Many churches were constructed of stones taken from pagan temples - and the remains of several can be seen today.
Jerash was hit further by the Persian invasion of 614 AD and the Muslim conquest of 636 AD. A series of earthquakes in 749 AD did serious damage to the city and hastened its decline, and its population sank to 4000.
The Crusaders described Jerash as uninhabited, and it remained abandoned until its rediscovery in 1806, when Ulrich Jasper Seetzen, a German traveler, came across and recognized a small part of the ruins. The ancient city was buried in sand, which accounts for its remarkable preservation. It has been gradually revealed through a series of excavations, which started in 1925, and continue to this day.